For a long time, I was puzzled by BVG plans to extend U5 through central Berlin. After all, that part of town is already served by three successful lines:

Why build an expensive new underground line at the center of town instead of (for example) connecting the notoriously underserved Weißensee district? The answer finally dawned on me, after watching a few of Jarrett Walker’s lectures on achieving “high-ridership transit”.

Among other points, Walker stresses the importance of connectivity in transit networks; after all people will only use a transit network which gets them to their destination. Specifically, the current U5 reminds me of Tucson’s bus line 15 which ends at its first connecting stop (roughly minute 34 in the video above).

If we look at the U5 through the lens of connectivity we see its problems as a transit line:

This means, many passengers will have to switch trains twice to get to central Berlin. Also, changing trains at Alexanderplatz means venturing into the labyrinth of tunnels between U2, U5, and U8… Clearly, such inconvenience turns some passengers away and therefore increases car traffic along B1 (and the controversial A100 extension).

The first two are obviously useful, because they connect the U5 to important north-south lines; extending its one-change connectivity through Kreuzberg, Neukölln, Reineckendorf, Steglitz and Schöneberg as well as the northern and southern outskirts of Berlin. In some cases using the Ring will get you there faster, but it’s still a massive improvement. (Also consider that U-Bahn trains run more frequently at night than S-Bahn trains.) 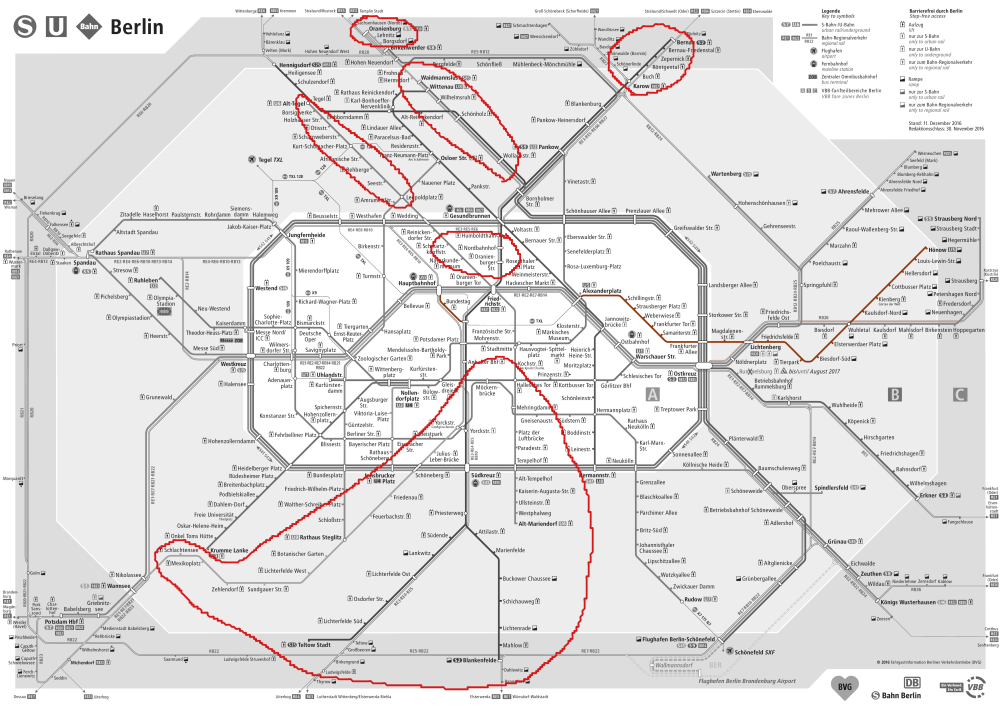 The connection to Hauptbahnhof is also desperately needed. After Deutsche Bahn consolidated its long-distance stations at Hauptbahnhof, a fast, reliable connection there adds access to the entire German train network. Without access to DB trains many U5 passengers might turn to cheap flights from Schönefeld to Hamburg, Munich or Cologne instead of the fast and green ICE trains.

In the end, the only puzzle in U5 extension is BVG’s messaging on it. Is the idea of connectivity deemed to complicated? Apparently so: Both the U5 project group and the state traffic planners praise “better access to Berlin’s famous sights” in their project descriptions, a point which Berlin constituents could not care less about. The state planners finally acknowledge connectivity benefits in their FAQs — hidden among 14 other points.

For a transit project funded by public resources that’s not just arrogant, it’s negligent. The red-red-green coalition is lucky that conservatives did not use the U5 extension in their “wasteful spending” narrative — they might have toppled a great public investment.